What is Advanced Electrolysis?

Skin tags are harmless and benign skin growths that are most often found on the neck, under the bra and arm area and in the groin. They can appear in various colours from flesh to dark brown. They can be just slightly raised, or they will have a stalk or neck like a mushroom or they may have a flat neck.

Clients that develop several skin tags may have a genetic predisposition as this condition often runs in families. They tend to start appearing with age especially in people over 50 years of age. Friction is the likely contributing factor as they appear in the areas where clothes may rub, such as collar lines, bra straps, underarms and groin etc. Treatment with electrolysis is quick and easy and very successful. Very little evidence is left of the skin tags presence.

What happens in a treatment session?

The surrounding area is sterilised. A fine needle is inserted into the lesion to cauterise the blood supply, rendering the lesion dead skin. Most of the lesion will fall off at the time, but any remaining skin will continue to dry up and drop off, in the same way as a scab would. If the tag was attached over a large area, a small white mark might remain once the dead skin has dropped off; this will not normally return to your natural skin colour. Many can be treated at the same time. 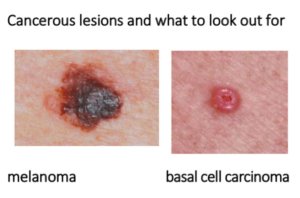 Melanoma is caused mainly by intense, occasional UV exposure that may have frequently led to sunburn, especially in those who are genetically predisposed to the disease.

About 1 in 10 of people with a melanoma have family members who have also had one. There are several reasons for this. Fair skin is inherited; dysplastic naevi can run in families, as can a tendency to have large numbers of ordinary moles.

Melanomas may not cause any symptoms at all but tingling or itching might occur at an early stage. Some melanomas start as minor changes in the size, shape or colour of an existing mole whilst others begin as a dark area that can look like a new mole. Later on, a melanoma may feel hard and lumpy, and bleed, ooze or crust up.

All melanomas do not look the same, and there are several different types.

The ABCD system tells you some of the things to look out for.

A melanoma may show one or more of the following features:

ASYMMETRY
the two halves of the area differ in their shape.

BORDER
the edges of the area may be irregular or blurred, and sometimes show notches.

COLOUR
this may be uneven. Different shades of black, brown and pink may be seen.

DIAMETER
most melanomas are at least 6 mm. in diameter.

Melanomas can appear on any part of the body, but they are most common in men on the body, and in women on the legs.

At first, a basal cell carcinoma comes up like a small “pearly” bump that looks like a flesh-coloured mole or a pimple that doesn’t go away. Sometimes these growths can look dark. Or the client may also see shiny pink or red patches that are slightly scaly.

Another symptom to watch out for is a waxy, hard skin growth. Basal cell carcinomas are also fragile and can bleed easily.

JGSC uses cookies. By continuing to browse the site, you are agreeing to our use of cookies.

We may request cookies to be set on your device. We use cookies to let us know when you visit our websites, how you interact with us, to enrich your user experience, and to customize your relationship with our website.

Click on the different category headings to find out more. You can also change some of your preferences. Note that blocking some types of cookies may impact your experience on our websites and the services we are able to offer.

These cookies are strictly necessary to provide you with services available through our website and to use some of its features.

Because these cookies are strictly necessary to deliver the website, you cannot refuse them without impacting how our site functions. You can block or delete them by changing your browser settings and force blocking all cookies on this website.

These cookies collect information that is used either in aggregate form to help us understand how our website is being used or how effective our marketing campaigns are, or to help us customize our website and application for you in order to enhance your experience.

If you do not want that we track your visist to our site you can disable tracking in your browser here:

We also use different external services like Google Webfonts, Google Maps and external Video providers. Since these providers may collect personal data like your IP address we allow you to block them here. Please be aware that this might heavily reduce the functionality and appearance of our site. Changes will take effect once you reload the page.